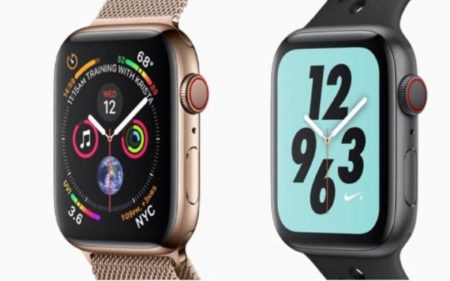 There are a number of ‘smart’ devices currently percolating in the current market. Whether they be tablets, phones, or laptops, technology continues to grow leaps and bounds on a seemingly daily basis. Apple has long been a pioneer in providing the consumer with an excellently personal technological experience. The year 2018 is no different. Currently, the Apple Watch Series 4 is taking the technological world by storm. Clever, beautiful, and comprehensive, this Apple product is making many rethink the premise of owning a phone or a conventional watch.

The entire design of the watch is new and improved. According to Apple’s official site, the watch is “not just evolved, transformed.” Without question, the most noteworthy characteristic of the watch is it’s display. It’s the largest display ever made for an Apple Watch. The screen itself is 30 percent larger than the last version. The watch also now has curved corner — which allows for the screen to flow seamlessly rather than be cut off abruptly. The touch surface of the screen itself also extends all over the screen (unlike in previous models).

Unlike previous models, the Apple Watch Series 4 now has two sensors. One allows the user to check their heart rate, and the other includes an electrical heart sensor. By using an ECG app, one can transmit an electrocardiogram to their own doctor by using the watch. This facet alone is rather extraordinary.

The enhanced screen space allows for an improved experience as it pertains to streaming shows, movies, and clips. Furthering this is the improvements Apple made to its watch’s speaker. The Apple Series 4 speaker is 50 percent louder than the Series 3 Speaker. This includes noise levels for the Walkie-Talkie and Siri elements. Furthermore, the microphone was re-positioned in order to prevent against echoing during phone calls.

From a health standpoint, the watch is able to analyze heart rhythms. It’ll then send a notification to the user should it find any irregularity in heart rhythm. Additionally, there’s a fall detection measure which measures the impact of a potential fall. If bad enough, the watch will send a message allowing for the user to contact emergency services. Should the watch not detect any movement for 60 seconds, it’ll automatically alert the police/ambulance (along with a message to emergency contacts). As such, this watch would make a ton of sense for one who enjoys adventurous hikes into the wilderness — particularly alone.

From a color standpoint, consumers can get the Apple Watch Series 4 in space gray, gold, and silver. A normal Series 4 phone will start at $399. With GPS added onto the phone, the price bumps up to a starting of $499.

As one can see, this item offers the very best in technology — particularly when it comes to health-related tools. A watch of this magnitude truly is a state-of-the-line product. With all of the practical features — coupled with its beautiful appearance — one would do well to procure an Apple Watch Series 4.